The Koksilah Music Festival is being organized by a volunteer team in support of Indigenous-led cultural resurgence work in the Pacific Northwest. All funds raised by the festival will be distributed to these three important grassroots initiatives.

Xwaaqw’um (prounounced “Who-auck-wum”) sits on the west shore of Saltspring Island. It translates to “female merganser duck place” in the Hul’q’um’i’num language, and is also known as Burgoyne Bay. Since spring of 2015, Quw’utsun (Cowichan) elders, knowledge keepers, and organizers have hosted a series of cultural gatherings at Xwaaq’wum, aiming to revitalize Quw’utsun cultural use and occupancy of their traditional territory. They provide summer camps where Indigenous youth can reconnect with the land, sea, and cultural practices, including activities such as cedar weaving, drum hide preparation, hunting and fishing techniques, clam garden restoration, intertidal learning and plant medicine walks. They also organize cross-cultural activities to foster understanding between Indigenous and Settler cultures. Events have ranged from canoe trips and storytelling sessions to camas planting and environmental restoration projects. Read more here.

“The project is about continuing and enhancing indigenous ways of being on the land and sea and with each other… The core goal is to have everything we do feed back into providing opportunities to indigenous youth and to re-engage with culture and ways of life that have been forcibly removed from indigenous communities and people based on racist colonial government and church policies over the majority of the existence of so-called Canada.” 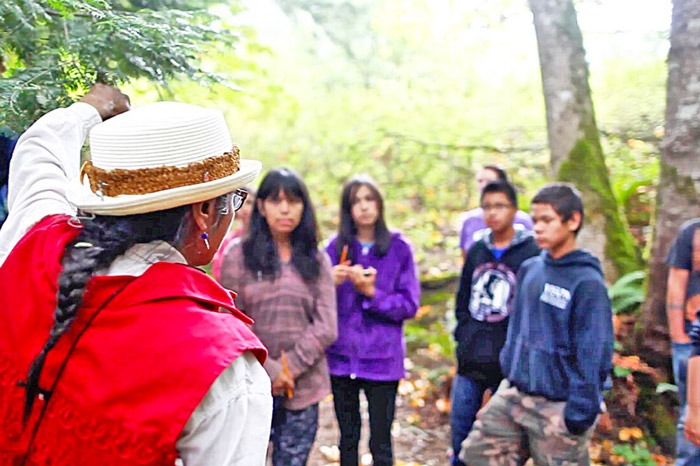 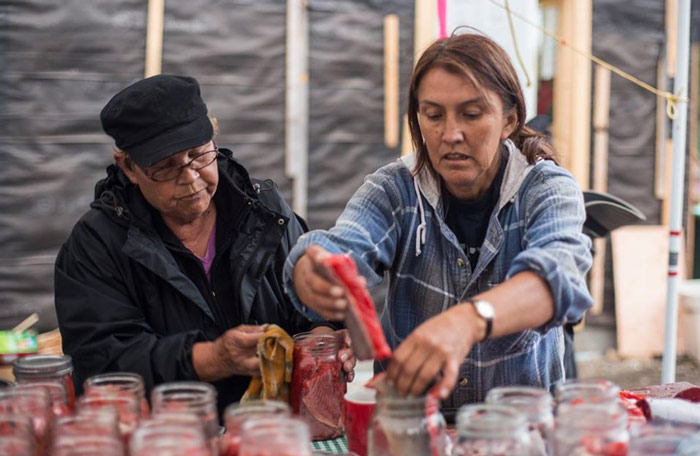 Unist’ot’en Camp is located on the Wedzin Kwah (Morice River), near Houston, BC. Energy companies including Chevron and TransCanada are aiming to push fracked gas (LNG) pipelines through Unist’ot’en territory without their consent. The Unist’ot’en homestead is not a protest or a demonstration—the clan is occupying and using their traditional territory as they have for centuries. They are protecting and utilizing their hunting, trapping, fishing, and plant gathering territories to ensure that future generations will also have the opportunity to live close to the land. The Unist’ot’en have been blocking the pipeline right-of-way for the last 8 years, and have continued to expand their camp to include a traditional Wet’suwet’en pithouse, bunkhouse, permaculture garden, and greenhouse. They are completing construction of a new healing center, offering a space for community members to return to their traditional teachings and land-based wellness practices. Read more here.

“The corporations never informed us or consulted us about their plans. Pacific Trail Pipeline’s proposed route is through two main salmon spawning channels which provide our staple food supply. We have made the message clear to Enbridge and Pacific Trails and all of industry: We cannot and will not permit any pipelines through our territory.”

Lax U’u’la (Lelu Island) lays at the mouth of the Skeena River near Prince Rupert, BC, on traditional Lax Kw’alaams territory. The shallow eelgrass beds of Flora Bank directly southwest of Lax U’u’la are the most important juvenile fish habitat in the entire Skeena river system for salmon, steelhead, and numerous other species. Ten Nations and 60,000 people in the Skeena watershed rely on these fish for food, income, and cultural identity.

In May 2015, the Lax Kw’alaams community voted unanimously against an LNG facility and marine terminal on Lelu Island and Flora Bank.  Two months later, the BC government disregarded the community’s decision and passed legislation to allow Petronas to build an LNG export facility on Lax U’u’la. To protect their territory and crucial fish rearing habitat, members of the Lax Kw’alaams have built a camp on Lax U’u’la. They consistently turn away LNG contractors each time they attempt to do work at Lelu Island. The Gitwilgyoots Tsimshian are harvesting and preserving traditional foods at their camp, and using it as a base for cultural resurgence and connection to the land and waters around Flora Bank. Read more here.

“Our Traditional ways of life and the resources which have sustained our people are not to be pawns in the Christie Clark Government’s LNG dreams. Development within our Traditional territories must have our Free, Prior and Informed consent. The people of Lax’walams spoke very clearly in their rejection of the 1.25 billion dollar offer from Petronas, and this camp builds upon that rejection. This issue is not just a First Nations issue but one that will affect all British Columbians, especially those who rely upon healthy and abundant Fish stocks, of a variety of species at the mouth of the Skeena River.”

Interested in throwing down a little money for these groups but can’t come to the festival? Donate directly here: